Withania Somnifera more commonly known as ashwagandha is a medicinal herb that has been used for thousands of years before the dawn of modern medicine, so let’s discuss what happens when you take ashwagandha daily.

It was most commonly used in the Indian tradition of medicine called Ayurveda. The herb has extraordinary health benefits, and has been cited as a powerful anti-stress solution; Ashwagandha has only recently been brought into the spotlight here in America. Let’s break down what might happen if you were to start taking this plant supplement on a daily basis.

Ashwagandha is in a category of medicinal plants called “Adaptogens” which are plants that are known for various health benefits. You may have heard of “Indian Winter Cherry ” or “Indian Ginseng,” these are common street names referring to ashwagandha.

The herb has been used for millennia in the southeast parts of our world, primarily in India. It dates back to the year 6000 B.C. and It is the most important medicinal herb in the Ayurveda which is an ancient practice of medicine in India. Ashwagandha is used as Rasayana which is the practice of creating a medicine that promotes youthful energy, improves mental health, and expands happiness (NCBI).

“Among the ayurvedic Rasayana herbs, Ashwagandha holds the most prominent place. It is known as “Sattvic Kapha Rasayana” Herb. Most of the Rasayana herbs are adaptogen / anti-stress agents (NCBI).”

The term ashwagandha comes from the Indian word “ashwa” which means horse; because the root smells like a horse and it will give you “the power of a horse.” When the plant is crushed and mixed with water it can be used as a paste and rubbed onto inflamed joints.

Ashwagandha is also used to treat snake bites and prevents the venom from spreading across the affected area. The flowers of the plant are used as an aphrodisiac for younger people and most recently scientists have found that consuming ashwagandha can increase fertility in women and sperm count in men.

The leaves of the plant are very bitter and are used to treat headaches, fever, and swelling. Today, ashwagandha is typically taken in either a supplement capsule form, or as churna which is a fine powder that can be mixed into drinks such as tea, coffee, and water.

As you can see, the benefits of taking this plant have been widely known about and used for hundreds of years in Southeast Asia and India. There are a lot of areas in which this plant is useful for your overall health and wellness including but not limited to:

The most common modern-day use for ashwagandha is stress relief. There has been extensive research done on the effects that taking ashwagandha has on bodily stress. The research all came back with conclusive evidence that those who took an ashwagandha supplement were significantly less stressed overall than those who did not take a supplement in a controlled study group (NCBI).

It is also worth noting that the stamina increases in those taking ashwagandha versus those that did not take it were notably different (NCBI). The ancient medicinal doctors of India called the Sushrata knew this, which is why they named the plant after a horse; because of the strength benefits that were so clearly present.

Another very common effect of taking ashwagandha is an increase in semen count for men and increased fertility in women. It was and still is used as an aphrodisiac in a lot of cultures for younger people.

Funnily enough, while the herb drastically increases testosterone in men it has no effect on testosterone in women, so there is no need to worry if you are a woman who wants to take ashwagandha but doesn’t want to increase testosterone (NCBI).

There was a clinical trial done over 60 days on participants who were having trouble conceiving; after the trial was finished 14% of the women who had never been able to conceive before even after getting treatment were able to successfully become pregnant by only taking a daily dose of ashwagandha. Not only does it increase fertility but after somnifera therapy which is a type of therapy only using ashwagandha, men had an increase in the quality of sperm and sperm production.

“Our findings reveal that Withania somnifera not only reboots enzymatic activity of metabolic pathways and energy metabolism but also invigorates the harmonic balance of seminal plasma metabolites and reproductive hormones in infertile men (NCBI).”

This is empirical scientific evidence that is used today to look at ways of improving fertility in women and sperm count/testosterone in men.

One of the newer and more fascinating studies that is currently going on are the effects that ashwagandha has on cancer, specifically in the later stages. There were patients involved in a study that had all had lung cancer and in the later stages refused modern therapeutic treatments and opted for somnifera therapy by taking ashwagandha and saw massive improvements and all moved into remission. Understanding more about how ashwagandha might impact cancer treatment and recovery is a massive step forward in modern medicine by using an ancient herb.

The Best Way to Take Ashwagandha

There are no major side effects of taking ashwagandha on a daily basis, and it can be taken at any time of day depending on personal preference.

As discussed earlier there are a lot of different ways to use ashwagandha and get the desired effects. It can be a paste, a liquid, a powder, or a leaf, and is able to be eaten in flower form. A common way to consume the herb is to take it in churna or powder form and mix it in with water and tea. It is important to make sure you are taking the purest form of ashwagandha as it is a plant and does come from the dirt so it might contain contaminants.

USA Medical offers one of the best, purest, and most effective ways to consume this miracle medicine; in capsule form. Taking a capsule is the quickest and easiest way to ensure full benefits are taken advantage of by the body. When taking a capsule the herbal medicine is broken down almost immediately and enters the bloodstream – the ashwagandha starts working around 15 minutes after consumption. At USA Medical we add black pepper to our ashwagandha tablets to increase bioavailability since pepper can naturally increase bioavailability by up to 200%.

Ashwagandha has been around for thousands of years, and its effects have long been known by our early ancestors. They understood the powerful medicinal effects that the herb had to offer as they had to survive by living off of the land.

If ashwagandha has been around for this long and is still used today, then the relevancy and importance of this natural medicine must be something incredible. Scientists are still to this day finding out more and more about what this miracle plant has to offer.

It is always important to consult a doctor if you believe you might have a reaction to taking ashwagandha, but there are no known major side effects to taking this daily, and we at USA Medical offer a powerful 1,300mg daily dose of ashwagandha to ensure full potency and efficacy of the supplement. This is something that every person, young or old should try to take because of the life-changing ability it has. The Indians knew it, our ancient ancestors knew it, and now it is being brought into the modern world; we here at USA Medical know how incredible ashwagandha is and want to share it with all of you. 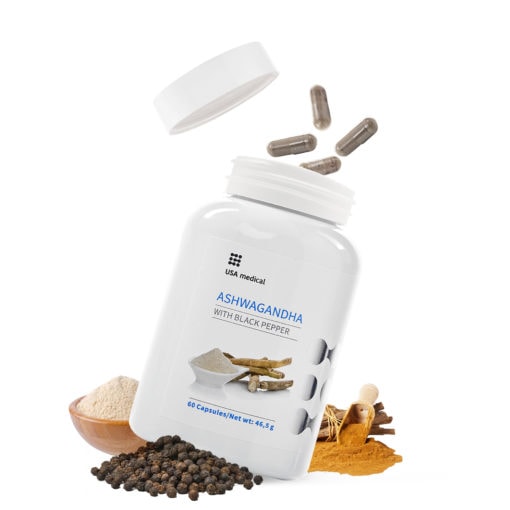 Ashwagandha is an evergreen shrub that grows in Asia and Africa and is used to balance hormones, calm the mind, and reduce stress.

Recommended Use: Take 2 capsules daily with food, followed by a full glass of water.

PROUDLY MADE IN THE USA