Since the dawn of civilization, our early ancestors have been using hemp plants to treat a variety of different ailments. The hemp plant should be called the mother of all anti-inflammatories, especially one specific extract from the herb – Cannabigerol, or CBG.

Hemp plants are categorized into a type of plant called an adaptogen; this is a plant that has medicinal properties to it that can help cure certain illnesses. Inside hemp plants are over 120 different types of cannabinoids, the most common being CBD, THC, and most recently discovered CBG. Every single day scientists and lab researchers are working to discover the different ways that these hemp extracts can help heal your body naturally.

Let’s take a look at CBG and why it is dubbed the “mother of all anti-inflammatories’ ‘ and will even beat out some of the most popular over-the-counter pharmaceuticals on the market today.

The Mother Of All Anti-Inflammatories: What Is CBG

First of all, before we begin talking about how CBG can help your inflammatory pain let’s discuss what CBG actually is.

CBG was first discovered in 1964 by two scientists who were looking for the missing piece of biosynthesis for the cannabinoid THC. When it was discovered researchers were shocked to find how useful it was in treating certain issues in our bodies as well as that it was a non-psychotropic extract meaning that CBG does not get the user high, the only benefits felt are the interactions with our body’s endocannabinoid system or ECS.

To understand how CBG works you must first understand the ECS and what it does. The ECS is a complex network of receptors that are scattered throughout every major organ system in the body. The ECS has two primary receptors: the CB1 and CB2 receptors that are in the brain and body. These are responsible for distributing the cannabinoids to the correct areas in your body for maximum efficacy when taking them. CBG interacts with the CB1 and CB2 receptors to reduce inflammation and increase daytime energy throughout your entire body.

If you would like to read more about the ECS then check out our other blog on it right here.

The research on CBG suggests that it is most useful in treating recurrent chronic inflammation in the body caused by many different factors. CBG targets the root cause of this inflammation and over time will allow your body to completely eliminate the inflammation that is felt in those specific areas rather than just temporarily fix the pain like most other medicines.

“We believe that {CBG} ha(s) the potential for development as novel drug candidates for the treatment of inflammatory conditions, (and) potentially for obesity where there is a huge unmet need (NCBI).”

Now that we know what is, CBG can be incredibly useful for a large number of reasons but how exactly does it work?

The Mother Of All Anti-Inflammatories: How CBG Works

As talked about earlier CBG interacts with our body’s endocannabinoid system or ECS. This allows the CBG to interact with receptors that disperse the cannabinoid throughout your body to target pain and inflammation.

CBG can either be ingested orally through a tincture, in capsule form, topically or in some cases, it can be smoked as well. One of the most interesting things about CBG is that it does not have any negative interactions with other medicines or drugs, and there are currently no known negative side effects to taking CBG.

One of the best uses for CBG is to relieve chronic pain. In several clinical trials when paired up against other painkillers CBG was shown to reduce pain at the source and provided longer-lasting pain relief over time than several of its other counterparts (NCBI).

This very specific targeting of pain is something that the endocannabinoid system excels at due to how many receptors are being activated in a certain area of the body to treat pain. Unlike pain medications that are given out in hospitals or the ones that can be purchased at the store that numb your entire body, CBG targets the acute point of the pain to provide maximum relief.

Another fascinating faucet of CBG is how it interacts with cortisol, the stress-causing hormone in our brains responsible for a lot of anxiety. There was a study done with over 127 participants over the age of 21 who were instructed to take CBG every day for six months and the results were extremely promising when looking at the outcome of the study.

“Efficacy was highly rated, with the majority reporting their conditions were “very much improved” or “much improved” by CBG. Furthermore, 73.9% claimed superiority of CBG-predominant cannabis over conventional medicines for chronic pain, 80% for depression, 73% for insomnia, and 78.3% for anxiety (NCBI).”

The outcome of this study is very promising for the future of anti-anxiety and depression medications. If CBG was able to be integrated into current therapies there could be a tremendous upswing in the way that these kinds of diseases are looked at and how they must be treated.

What CBG is known for the most is the way that it combats inflammation in the body. Chronic inflammation due to any kind of ailments such as arthritis, obesity, or injury is not pleasant to deal with.

Current treatments for chronic inflammation do very little to fix the issue at their core. These pharmaceutical companies will push out new anti-inflammatory drugs that will temporarily fix the issue and are incredibly damaging to other parts of your body if taken on a daily basis.

CBG will interact with the ECS to calm inflammation in any part of your body; it will also work concurrently with any other type of cannabinoid to increase efficacy. This is something called the entourage effect. The entourage effect is the scientific idea that when combining two or more cannabinoids with one another the intended effects will be stronger because they are both from the same plant, and interact with your body’s ECS very similarly.

For example, if you were to take CBG and CBD together, they would be able to work together to eliminate chronic pain from inflammation a lot faster than if you took an over-the-counter medication.

“Currently, the drugs used to treat inflammation are most often NSAIDs and steroids… Side effects can include an increased risk of gastrointestinal ulcers and bleeds, heart attack, and kidney disease (NCBI).”

The research clearly points to CBG being the go-to choice for inflammation treatment. There are even medications out currently that are FDA-approved and incorporate CBG in them for inflammation and epilepsy.

The Mother Of All Anti-Inflammatories: Final Thoughts

The bottom line is that CBG works for inflammation, and it works very well. It does the job that any traditional medication can do and does it better. The stigma surrounding hemp extracts needs to end so that the rest of the world can experience the incredible power of CBG oil. 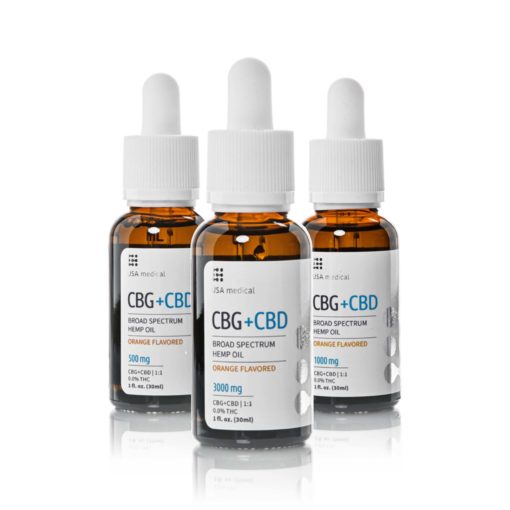